In the spirit of Movember, I have entrenched myself in a futile attempt to try and grow a mustache for approximately 12 days now.  I last shaved my top lip on Halloween, and here is my current situation, if you will.

I shared the above pictures with a group of friends to keep them apprised of my progress.  What ensued was more magical than anything I could have hoped for.  This is what happens when a group of college friends start talking about facial hair.  Enjoy!

Toy:  “Goddamn these pictures are making me hard.”

Seth:  “Toy, I want to see an update of yours sans goatee.”

“First, you guys gotta work on the total volume.  This is what facial hair looks like.  I’ve decided to wait until the end of the month to shave down.”

***Meanwhile, I receive a non-group text from Derek, who writes: “You guys and your iPhones, able to have this group convo…I’ll send a pick in about 8 years when I can grow anything that could be seen without a microscope.” 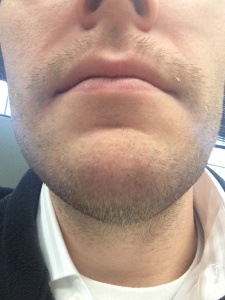 “If you liked that you’ll love this close up, inclusive of neck beard…”

Seth:  “That’s almost James Harden territory.  I can only aspire for such impressive facial hair.  Sadly I know it’s a dream that will eternally remain unfulfilled.”

Luke:  “I think by the end of the month I will legitimately have more hair on my face than my head.”

Ham:  “There’s no challenge in growing a beard and then having a stache for one day though.  You need to know the pain of stache only for a full month.  Man’s game.”

Luke:  “My gym is having a beard growing event this month.  I’m trying to multitask.  Plus, there is no pain with what you are rocking.”

Ham:  “There is a lot of pain, I just didn’t shave the neck today.  I know I’m not a sex offender, but my mirror says otherwise…” 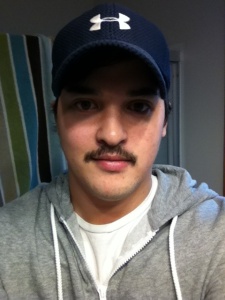 Ham:  “Now that is one sexy stache, well played sir.  My co-worker would like to know if that stache is ‘mascara aided’.”

Seth:  “Toy is the leader in the clubhouse at the moment, hands down.”

“I figured my pic demonstrating complete lack of ability to grow facial hair would turn the convo away.  Sad, I know.”

Jmah:  “Come on Ham, you know I had to put out some sort of product.”

Toy:  “Nope, all naturale.  I can’t wait until this month is over.”

Ham:  “Toy is uncatchable by anyone but Luke.”

Seth:  “I was thinking busting out the mascara.”

Ham:  “I was supposed to be set up with a friend of a friend last Friday [but] had to decline on the grounds of improper mustache issues.”

Seth:  “Toy, how long have you been growing?”

Luke:  “F that.  I met this girl singing karaoke at a bar that was all about it.”

“Geez.  Just realized Kali and Becky are on this convo…sorry.”

Ham:  “Yes with a full BEARD.  Stache only is not the same.”

Ham:  “I’m convinced mine hasn’t grown any in the last five days.”

Toy:  “Its easier for Ben, he doesn’t have to worry about perceptions of being a sex offender since…. Well you know.”

Ham:  “This is one of the more embarrassing things I’ve ever done, and that’s saying a lot.”

Ben:  “Toy isn’t it tough getting acting gigs as a little kid with that stache :)”

Ham:  “Toy I’m really torn about your pic, on one hand I want to puke, but on the other I can’t look away.”

Kali:  “Oh. em. gee. boys…thanks for the entertainment.  I’m at a conference and you all just cured my boredom!  Keep up the good work :)”

Luke:  “Nice Ben. I like it.  Surprisingly, neither Toy’s or Ben’s is that creepy to be honest.”

Toy:  “Trust me most other people don’t share your sentiment Luke.”

Ben:  “I kinda like mine.  Been getting mixed reviews tho.”

Seth:  “Ben, all you need is a van and serial rapist glasses.”

Ben:  “I have a similar problem to Alex tho.  Instead of red beard tho, I get more blonde somehow.”

Ham:  “Awesome, now I have new pics for all of you when you call me.”

Becky:  “Wow, I had a case of the Mondays, but not anymore!”

Stay tuned for more updates in this month-long mustache saga.