Week 15 of 2012 NFL season offers a slew of games with potential playoff implications.  There are six games featuring two teams with winning records, making this week the latest in a season in NFL history with at least six such games. With so many seemingly important games, it makes sense to rank them by importance / overall watchability (not a word, I know).  Here we go!

(Home teams in CAPS; lines per Sportsbook.com as of 3:00 pm on Thursday, December 13th) 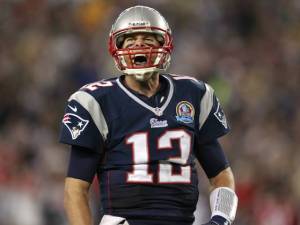 Tom Brady truly looks like a man possessed.  His eff you fist pump after a first down scramble on Monday got me fired up from my couch (er, my work chair).  The Patriots have won seven straight games and Brady is looking like he’s on his way to winning another MVP award.  I would be very  unhappy to have to play the Pats right now.  If I’m a west coast team flying cross-country in December, with a young QB making just his 4th career start, I would be terrified.

The greatest, most storied rivalry in the NFL.  A win by the Packers will clinch the NFC North and would deal a severe blow to the Bears’ playoff hopes.

The 11-2 team that nobody believes in versus the team that everyone is expecting to flip a switch and run to the Super Bowl.  The Falcons are chasing the number one overall seed, and the Giants are trying to lock up a playoff spot.  Something’s gotta give.

This is just about as good as it gets.  The winner is right back in the NFC wild card race, while the loser is effectively eliminated.  December football at its finest.

Losses by the Giants and Redskins would swing the door wide open for the Cowboys to jump into the NFC East driver’s seat.  Meanwhile, the Steelers need to win to keep pace with the  Bengals for the AFC wild card. The loser is likely in serious trouble.

The Colts and Texans square off again in just two weeks, meaning the 9-4 Colts can still technically catch the 11-2 Texans for the AFC South title.  Andrew Luck will get a chance to make a splash in a huge late season matchup that could very well be a playoff preview.

Winners of eight straight games, the Broncos aim to try to beat a good team for the first time this season.  Moreover, the winner of this game assumes the inside track for a first-round playoff bye.

8.  CLEVELAND (No Line) over Washington

My Green Mountain Coffee Bold Roast  Bold Pick of the Week.  No RG3 means the Redskins will put their current four-game win streak on the line behind the arm of rookie QB Kirk Cousins, who delivered the drama in last week’s last-minute come-from-behind win.

Cleveland brings its own winning streak into this one and looks to build some momentum going into next season.  If they can take care of the football and control the clock, they could steal a win from the streaking Redskins.

The over/under on this game is 54 points.  I’m taking the over, and, along with fantasy owners everywhere with Saints or Buccaneers players (ahem, Drew Brees), I’m hoping I’m right.

It’s crazy that Seattle can still get the number two seed in the NFC.  That botched Hail Mary call is coming in awfully handy right about now.  Going cross-country on the road will be a nice test for Russell Wilson and a Seahawks team trying to maintain its momentum and lock up a playoff spot.

As I predicted on Thursday, the Bengals took advantage of five Philadelphia turnovers to keep pace in the AFC wild card race.

Two teams that have quietly hung around in almost every game they’ve played so far this year.  Still drinking the Jaguars / Chad Henne Kool-Aid.

Both of these games have 1:05 Pacific (4:05 Eastern) kickoffs.  There’s a solid chance I will be using these three hours to catch up on my sleep.  Let me know who wins after  I wake up.

This game features as many combined wins (five) as both of my non-playoff fantasy football teams.  Living in the Bay Area, I would normally be subject to three hours of punishment, but instead I am very thankful for the existence of NFL Red Zone.

On a short list for the worst December Monday Night Football games of all time.  How does Tennessee host a MNF game?