I have reached the point in my life where I don’t even pretend to try to watch the Pro Bowl.  In fact, the only reason I even remember that it takes place this weekend is because of the NFL’s genius idea to move the game to the bye week before the Super Bowl.  That’s like giving us a wine cooler with dinner and making us save the champagne for dessert.  I’d rather just have the champagne and forget about the wine cooler altogether.

Something has to be done.  The NFL cannot keep rolling out this sad excuse for a football game and selling it as a battle of NFL superstars.  Luckily, there are some great alternatives that the NFL could (and I believe should) consider.

Make the Game Mean Something

Major League Baseball does it right.  Pit the best players from each league against the other with home-field advantage in the World Series on the line.  Do you think some of MLB’s best are going to just skip the All-Star game now?  Not with home-field advantage in the World Series at stake.  Now superstar players on fringe playoff teams will be playing their hearts out, knowing that if their team makes a run in the playoffs to the World Series, they could have four home games.  That’s a huge deal for any team.

Proposed Solution:  The conference champion of the winner of Pro Bowl (NFC or AFC) gets to pick the site of next year’s Super Bowl, as long as it is not their home field.

Think about it.  The NFL could keep the Pro Bowl during the off week before the big game and guys like Aaron Rodgers, Tom Brady, or Matt Ryan (i.e. players whose teams fell short of the Super Bowl) would have motivation to play and make a difference in the game, since they could very well be in the Super Bowl next season.

Can you imagine if the Packers won the NFC Championship game next year and chose to play in Ford Field in Detroit?  Or the Metrodome in Minneapolis?  Not only would the Packers play extremely close to home, but their offense would thrive in a dome setting!

The biggest problem with this idea: Waiting for the conference champion to select the site of the Super Bowl would make it almost impossible to coordinate in just two weeks.  Perhaps there is another solution that would make this idea feasible, but there is certainly not much to lose by raising the stakes on the Pro Bowl a little bit.

If the NFL is going to send its starts to Hawaii for a weekend to play in a glorified scrimmage, the least it could do is provide some entertainment for fans.  You know, the people who allow the owners, personnel, and players to make millions of dollars playing a game?

The solution?  Three words: Rock. And. Jock.  Well, really, it’s Rock ‘N’ Jock.  Yes, I’m talking MTV’s former annual event featuring the biggest names in sports and biggest celebrities on the SAME TEAM.  Sure, they would likely have to play flag football, but who cares?  Could you imagine the biggest NFL superstars teamed up with the biggest names in film, TV, and music?  Who do you think has the advantage in the following match-ups (considering a five-on-five flag football game):

While you ponder that thought, here’s a throwback to a class team of Rock N Jock past: 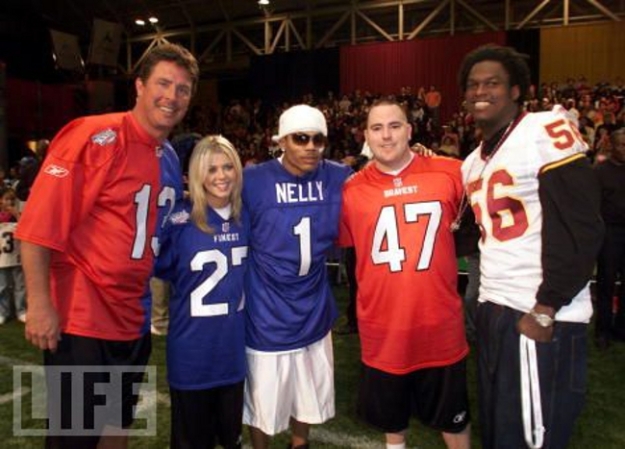 If you took more than, say, 20 seconds to consider which of the above fake teams would actually be the best, you’re already starting to help me prove my point.

How awesome would this be?  You could have fans vote on their favorite players, musicians, celebrity crushes, etc.  What would the teams’ theme songs be?  Would the musicians on each team perform them live?

The possibilities are endless!  I really think the NFL is missing out on a true moneymaker here, not to mention an incredible opportunity to get this type of photo op: 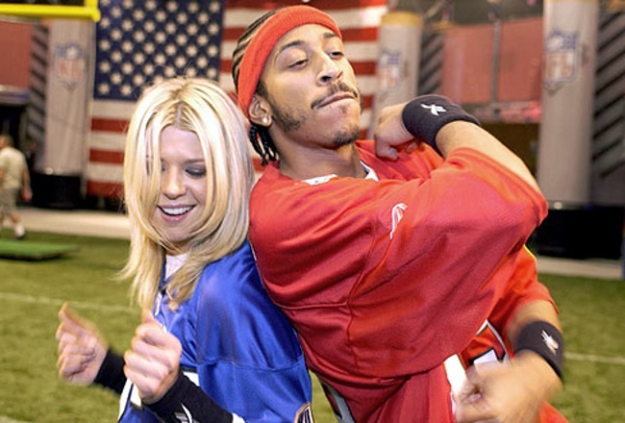 I know what you’re thinking.  Those people look very similar to Tara Reid and Ludacris.  Exactly.

Besides, who wouldn’t pay money to see Aaron Rodgers throwing bombs to Aziz Ansari, A$AP Rocky sing the praises of Joe “Pretty” Flacco, or Chriss Pratt catching touchdowns from Andrew Luck?  No one, that’s who.  At least no one who enjoys watching football and has even moderate knowledge of pop culture.

What is the best thing about the NBA All-Star weekend?  Sure, the game itself is generally competitive and entertaining, but the real fun is in the slam dunk and three-point contests.  Approximately eight or so of the best dunkers and shooters in the NBA compete for bragging rights and in some cases, endorsement deals.  Similarly, baseball is known for the home run derby.  These events are popular because they are easy enough to understand, while short and exciting enough to be entertaining.

Remember the old days of the NFL quarterback challenge?  No?  Check this out.  (Sorry, Big Ben was the best I could do.  Sadly, there is not a whole lot of QB challenge footage available on the internet.)

The NFL’s best players could get together and compete in a series of events, separated by position.  Individual players could rack up points depending on their finish in each event, while the NFC could compete against the AFC for bragging rights or maybe even home-field advantage in the Super Bowl (see above).

For example, the slate of quarterback events would look something like this:

Accuracy – QBs throw at moving bulls-eyes  from various distances, with a greater amount of points being awarded based on distance and accuracy.

Obstacle Course – A series of  obstacles combined with some standard quarterback throws.  Points awarded primarily for the fastest times, but adjusted for successful throws.

Long Toss – Exactly what it sounds like.  Grip it and rip it.

The skills competition (that’s what I’ll call it) is great for multiple reasons.  It’s entertaining, allows players to compete without risking serious injury, and it settles all sorts of bar room bets like ‘I bet X quarterback has a stronger arm than Y quarterback’.  Thanks to events like the Long Toss, we’ll all be able to find out.

Proposed Solution:  QB Challenge, but for ALL positions!

Well there we have it.  Three solid solutions that were conceived over the course of a couple of beers and some episodes of Portlandia, all of which are better alternatives to whatever is that they call the game being played this weekend.

The best solution?  I think a combination of the above.  Have weekend that features a Rock ‘N’ Jock type event with NFL stars, celebrities, and musicians.  In addition, have a skills competition between Pro Bowl rosters that allows the NFC to compete against the AFC for some sort of tangible prize.  Obviously, this idea is a work in process and is not perfect, but anything is better than the current format.

With that said, you’re welcome, NFL.  You’re welcome, Mr. Goodell.  At least give me a little credit or cut me in on a piece of the pie when you finally come to your senses.

1 thought on “Three Ways to Fix the NFL Pro Bowl”