Let’s break down this Twitter feud, analyze its meaning, and figure out who came out on top.

Tale of the Tape

Interaction with Tom Brady:  Called him an ‘A-Hole’.

Notable Quote: The following exchange took place in a 2010 interview with Deion Sanders:

Deion: “Two words or less, when I call out a name, tell me what you think.” 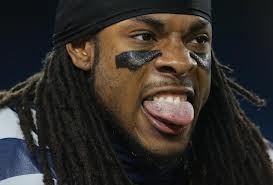 (Picture created and tweeted by Sherman himself.) 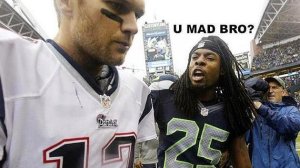 Notable Quote:  “By the time the fifth round rolled around, the damage was done.  I was like, ‘When I get to the NFL, I’m gonna destroy the league, as soon as they give me a chance.’  And that’s what I’ve been doing ever since.”  – Richard Sherman, on being drafted in the 5th round

Revis has a greater Twitter following, which means his words are amplified more, on average, than Sherman’s.  Advantage Revis.

On the other hand, Sherman is from Compton, while Revis is from a city in Pennsylvania that I cannot pronounce or locate on a map without the aid of Google.  Given what I know about Compton through extensive research and hip-hop music (a.k.a. what I’ve heard in Dr. Dre and Kendrick Lamar songs), I feel as though Sherman is more seasoned when it comes to throwing verbal jabs.  Advantage Sherman.

Sherman attended Stanford, so I assume he is at least relatively smart.  Not to put down the University of Pittsburgh, but it’s not Stanford on an academic level.  Neither is my alma mater (University of Wisconsin) for that matter. Advantage Sherman.

Lastly, in the ‘Interactions with Tom Brady’ category, Sherman demonstrated confidence (talking smack to Brady during the game), commitment (following up with Brady after the game to talk more smack after Brady told him to ‘see me after the game’), and creativity (creating the above picture of his post-game interaction and tweeting it out to the masses).  Revis called Brady an ‘A-Hole’.  Advantage Sherman.

It all started innocently enough, with Richard Sherman hosting a Q&A session with his fans via Twitter.  One follower asked him who he thought the two best corners in the NFL were (besides himself, obviously).  Here was his response:

Another user simply asked, “what about @Revis24?”  Sherman’s response?

Shots. Fired.  Kind of.  Revis is currently recovering from a torn ACL, so Sherman must not consider him in the discussion of ‘Best Corners in the League’ since he can’t physically play.  Makes sense, I guess.

Apparently, word got around to Darrelle Revis that Richard Sherman was talking some noise about him, so Revis decided to fire back at Sherman.

I never seen a man before run his mouth so much like girl. This dude just steady putting my name in his mouth to get notoriety @rsherman_25

Then things really got interesting.

@Revis24 don't need ya name… Ur name will be irrelevant once u step back on the field bruh. Get ya picks up!

Let’s see how the rest of the battle played out and analyze the points made by each player.

@Revis24 don't need ya name… Ur name will be irrelevant once u step back on the field bruh. Get ya picks up!

Sherman lets Revis know that he doesn’t need to name drop in order to gain recognition.  He’s going to let his play speak for itself.  In fact, Sherman believes that once Revis does return to the field, his play won’t matter because Sherman’s play will outshine Revis’.

Sherman brought up statistics, specifically interceptions, to back up his argument.  Here are the two CBs’ interception numbers since Sherman entered the league in 2011:

Looking at the last two years, it’s clear Sherman has been more productive, due in large part to Revis’ 2012 ACL injury.  Still, how would Revis refute this claim?

@rsherman_25 I ain't your competition bro, @roddywhiteTV is!!!

That’s a good point.  Corners don’t compete one-on-one with each other, and Roddy White did make Sherman and Co. look like little kids during the first half of the NFC Divisional playoff game.

To add insult, to injury:

My boy @JohnGeiger_ got more followers then @rsherman_25. Sit down young pup & wait your turn.

Huh?  Twitter followers?  That’s how Revis wants to play it?  Okay, so Revis is saying his Marketing & Business Manager, John Geiger, has more followers than Richard Sherman, which apparently is supposed to mean something.

For the record, as of today, Richard Sherman has almost 30,000 more followers than John Geiger. So there’s that.

@Revis24 one season u will get 8 picks…. But it won't happen anytime soon… I did it in my 2nd season… So u have something to chase

Sherman takes the conversation away from Twitter followers – where he has a clear disadvantage – and back to the field, where (he seems to believe) he has an advantage.

To be fair, Richard Sherman had eight (8) interceptions in 2012, just his second NFL season.  Revis has never recorded more than six picks in a season and had only seven (7) in his first two seasons combined.  Based on these stats, maybe Sherman is right.  Maybe Revis does have something to chase.

That's like you saying your better then Deion Sanders & since he's not playing no more he's irrelevant for what he's done. @rsherman_25

Okay, I get what Revis is getting at here.  Just because Sherman had eight interceptions (more than Deion has ever had in a single season) and still plays, does that make him better than Sanders ever was?  No, but I don’t think this is what Sherman is saying.  I think he’s still backing up the fact that he wasn’t using Revis’ name to garner attention to himself, but was simply answering a question.

@rsherman_25 child please, lol!!! Your still taking baby steps son. Don't get to a head of yourself.

Stealing Chad Ochocinco’s catch phrase, and putting on a clinic in butchering the grammar of a single tweet.

And then Revis fired off this doozy:

Still not sure why Twitter followers mean anything.  If that’s the case, Eliza Dushku can talk some trash on both of these guys.

This dude just interrupted my NBA 2k game cause he has draSms to be a lockdown corner!!! HAHA #keepdreaming

First, what is a ‘draSm’?  I assume he meant ‘dream’, but I’m really hoping a ‘draSm’ is something so awesome it’ll blow my mind and change the way I view the world.

Sadly, a Google search for ‘what is a drasm?’ turned up nothing.

While Revis was airing his grievances, Richard Sherman must have been on a plane with no access to internet.  Why do I say that?

Got off my flight to this hilarious convo. So I have 8 picks 3 ff and a sack. My season stats looking like Revis career stats

But, Richard, of course you’re going to have more picks than Revis.  You’re a second year kid who was drafted in the 5th round.  QBs are going to pick on you, whereas they don’t even bother throwing at Darrelle Revis, because, you know, he’s a lockdown corner.

Boom.  You have a point, but Darrelle does have WAAAAYYYY more Twitter followers than you, because he’s more well-known and more famous and has his own island called Revis Island.

Remember that time the number of twitter followers mattered more than the production on the field? Me either @Revis24

Here's what you should do to end the argument! Compare my 1st 2year only 26 starts…. With any 2 (cont) http://t.co/FkIP7KlavY

As for Revis’ final retort?

So what have we learned from all of this?  For one, Richard Sherman’s mouth on the field translates pretty well onto Twitter.  The Stanford grad was pretty witty throughout his debate, but more importantly, brought facts into the conversation that helped back up a lot of his claims.

Meanwhile, while Darrelle Revis is obviously a great player, but he came out on the wrong end of this one.  First, he initiated the ‘discussion’ after Sherman refused to list his as one of the best two corners in the league.  Then, after Sherman was using stats to back up his arguments, Revis resorted to number of Twitter followers.  While this reflects Revis’ superior popularity among the masses, I think it made him come off as defensive and somewhat childish.  Considering I am the same age as Darrelle Revis, I feel as though I can make that claim.  Then again, I only have 114 Twitter followers, so what do I really know?

I will give Revis some credit for not low-blowing Sherman with the alleged PED thing.  Revis kept it on the field for the most part.  And by ‘on the field’, I mean on the actually field and on Twitter.

At least Skip Bayless sort of has Revis’ back.  Whatever that’s worth.

3 thoughts on “Breaking Down the Darrelle Revis vs. Richard Sherman Twitter Feud”