I don’t remember when it happened, but sometime over the course of the past four years San Francisco became ‘home’ and where I came from became just that. Where there used to be ‘the place I grew up’ and ‘the place I live now’, there is now only San Francisco, my home.

For the sake of time, words, and relevance to this current post, I won’t go into all of the reasons I fell in love with San Francisco, but one of them includes the live music I’ve witnessed over the past few years. It’s something I can’t even fully articulate, but there’s a certain energy present at shows all around this city, and the only way to really know what I’m talking about is to experience it yourself.

Some of the greatest live shows I’ve been fortunate enough to witness include Ty Segall, Thee Oh Sees, or some combination thereof. Both Ty Segall and Thee Oh Sees frontman John Dwyer have helped put the San Francisco garage rock scene on the map. Along with other acts such as The Fresh & Onlys, Sic Alps, The Mallard, and Mikal Cronin, among others, they’ve helped to create buzz around fast-paced, energetic, garage punk rock music and have produced the frenetic live shows to back it up.

Over the past few years, if you asked me what I loved most about living in San Francisco, I would have mentioned being able to attend these shows and be part of that scene, even if only for the night. There’s something liberating and borderline magical about working hard at your day job, going home, putting on your favorite flannel shirt, and heading to a show to take in music amongst a number of people who are likely doing the same thing.

At a live show, it never matters what everyone does for a living, because it’s not about the outside world. It’s about the music and about the connection between said music, the artists, and concertgoers. And man, these guys know how to work the crowds, even doing some stage-diving  and moshing of their own at times. 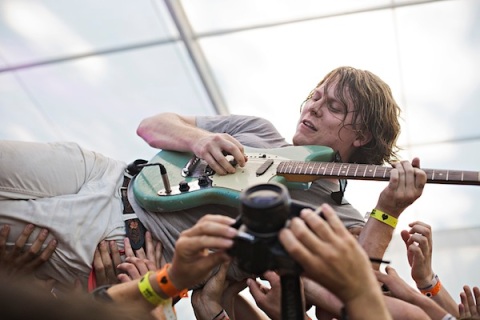 Ty Segall amongst the people.

Due to an influx of tech company talent, greedy landlords, and gentrification that has started to smooth the rough edges that once gave San Francisco it’s unique culture rent prices have soared. The average price of a one-bedroom apartment today is north of $2,800 per month, with some neighborhoods over $3,000. In several cases, long-time residents of cheap apartments are being forced out in order to make way for those willing to exorbitant prices.

As a result, artists, musicians, and lifetime San Franciscans are moving away from the city and being replaced by a homogeneous population of “phone-scrolling, blank-faced wanderers” as John Dwyer so eloquently describes. He goes on to say, “I prefer a taco to a vintage glasses store any day.”

While San Francisco may be gaining new businesses and trendy restaurants, it is slowly beginning to lose its art, music, and history. Ironically, the aspects of the city that have attracted so many people — the art, the Bohemian culture, the authentic taco shops in the Mission, etc. — are the very things being driven out to make room for the influx of tech millionaires and young professionals.

The paradox here is that the very things that made me fall in love with San Francisco — the characteristics that make the city special — are slowly starting to disappear as more and more white, young professionals like myself migrate to the city. As people move to San Francisco to experience a culture unlike any other in America, that very culture becomes saturated and uniform, which in turn makes it more like so many other American cities.

Overall, this all makes me quite sad. First, my favorite local musicians make the exodus to Los Angeles. Next, it may be my neighborhood coffee shop or my local liquor store owner. Somewhere down the line, it may be friends of mine or even me myself. But I guess that’s just the price to pay for living in a city that is high in demand and low in supply.

Still, no matter where they go or where I end up, Ty Segall and Thee Oh Sees will always be part of San Francisco.

Part of my San Francisco.